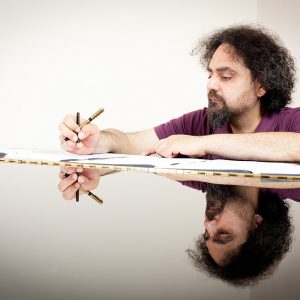 Salvatore Cirillo
pick a track
or
hire this composer
Salvatore Cirillo is an Italian composer, orchestrator and pianist. It was in piano that he gained his first diploma. Then he fell in love with jazz and its creative freedom of composition, and he gained further diplomas in jazz, harpsichord and composition to add to his CV. This allowed him to follow his love for music with the enthusiasm and curiosity he had as a child. A journey during which three works were published: the adaption and arrangement of pieces by Astor Piazzolla. After this, he brought prestigious recognition, amongst which was the first prize in an International Competition for composition and arrangement for jazz orchestra: Barga Jazz 2008 in Section B, Barga Jazz 2009 in SecionC, Barga Jazz 2014 in Section A.
Also came two CDs, with his signature: “Unpretentious” with piano and voice, and “Looking for Listeners” which won the “Independent Music Awards” Vox Pop in 2014. He has also involved in the album”Lions 4 Lines” as pianist and arranger.
In 2011 “Wild” was released, his first CD of soundtracks edited by Sifare Edizioni Musicali. His next soundtrack was for the documentary “Inside Africa” produced by Vision Editoriale and TERRA DI CINEMA. The documentary won the prize “HAI VISTOMAI?” 2012. In 2014 he wrote the soundtrack for the theatrical performance "Silvia ed i suoi colori" with Agostino Chiummariello as director.
In 2016 his Variation on the Theme of Twinkle Twinkle Little Star was selected to be published by the Conservatory of Music of Shangai (China). At the moment he works mainly as pianist and composer.
0