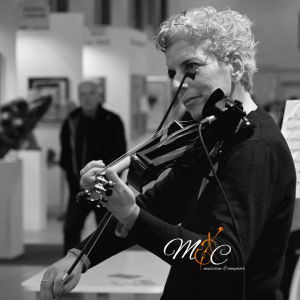 Maria Gabriella Citro
pick a track
or
hire this composer
Maria Gabriella Citro born in Vittorio Veneto (TV), is a multi-instrumentalist musician and an eclectic composer.
After her scientific high school diploma, she keeps studying the violin, the drum and percussions and plays as a drummer in several local pop-rock bands.
Since 2000 she loves studying electronic music and acquires the technique to be able to produce music by herself.
In 2012 she realized her first cd called “Inner Child” a collection of original an genuine music tracks.
Subsequently she deepens the study of music tuned to 432 Hz and its natural capacity for transformation, making it even more a tool of well-being for those who resonate with it. From this new knowledge in 2013 she produced her second cd called “Aedo Compieta” formed by a single song that lasts about 42 minutes and played with an Harmonic Disc tuned to 432 Hz.
Since 2014 she collaborates with an Indipendent Company dedicated to the Musical, as a musician, arranger and a technical assistance of direction.
In 2016 she attends a theoretical and practical course of sound engineer at the Association Lab3 in Preganziol (TV).
Her latest works as a composer of music for video are part of an artistic project called “Music in Colors”, an anthology made up of six videos where the mix of colors and music creates a sequence of emotional images.
0